Written by Bobby Knight
Rate this item
(0 votes)
As we head into August the coaching carousel should start slowing down with the beginning of the fall semester just around the corner. Two more women's positions were filled in the last few days which leaves the number of openings on the women's side in the single digits.

Bowling Green State Director of Athletics Bob Moosbrugger announced the hiring of Stephanie Damacio as the Falcons new women's head coach. Damacio, a 2011 Wichita State graduate, had been the assistant coach at BGSU for the last two seasons with the squad going 2-36 (.053) in that time frame. Damacio replaced Olga Elkin who departed for Nebraska-Omaha after a rocky two seasons which saw a slew of losses (36) and a lot of outbound transfers (7).


South Dakota State Director of Athletics Justin Sell announced the hiring of Joey Barnes as the Jackrabbits new men's and women's head coach. Barnes spent the last four seasons as the women's head coach at D2's Upper Iowa University in Fayette, Iowa. Barnes compiled a 45-29 record at Upper Iowa which was his first head coaching job after serving as an assistant at several schools over the last 15 years. Barnes replaces Michael Engdahl who stepped down after five seasons to pursue other opportunities.


Here is my current list of head coaching openings at the D1 level.

New Miami men's head coach Aljosa Piric named Petar Danolic as the Canes new assistant coach. Danolic has been working as a private tennis coach in Bradenton, Florida, since 2012 though he does have college coaching experience after serving as an assistant at Texas Tech and Arizona.

Illinois's women's coach Evan Clark, who just had the interim tag removed from his title, officially removed the interim tag from his assistant coach Kelly Cameron. Cameron, who played for Clark at UNC Wilmington, joined the Illini prior to last season after serving as a graduate assistant at North Georgia.

This last coaching update happened earlier this year but I didn't notice it until today when I was looking over the list of college coaches scheduled to attend the USTA Boys National Championships in Kalamazoo. Dimitar Kutrovsky, who was a three-time All American at Texas and who was in the ATP top 300 last year, is now the assistant coach at Texas San Antonio (UTSA). Kutrovsky retired from the tour and joined UTSA back in January but there wasn't any kind of news release by UTSA and he actually still isn't listed anywhere on UTSA's site - come on UTSA let's get on the ball!!

Dennis Novikov, who spent two seasons at UCLA before turning pro in the summer of 2013, picked up his first top 50 win after defeating #43 Federico Delbonis 6-4, 6-3 in the first round of the ATP Masters 1000 in Toronto. It was just Novikov's third win at the tour level and he'll go for #4 on Wednesday when he faces #6 Kei Nishikori.

Georgia Tech rising junior Chris Eubanks and 2013 Samford graduate Zac Dunkle will meet on Wednesday in the finals of the BB&T Wild Card Challenge. Eubanks advanced to the finals with a 6-3, 1-6, 6-1 win over Georgia Tech teammate Cole Fiegel while Dunkle defeated Harvard commit Galen Lee 4-6, 7-6(6), 6-4. The winner of the Wild Card Challenge gets a wild card into qualies at the ATP 250 event which begins on Saturday morning in Atlanta. If you want to follow along with the action you can check out the twitter feeds of the BB&T Atlanta Open and Parenting Aces's Lisa Stone. Lisa provided game-by-game scoring today while BB&T had a periscope feed running for a little while. 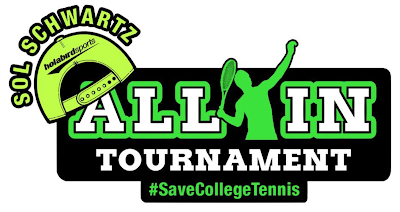 I also wanted to make mention of a junior tournament that Lisa is organizing which will be taking place from August 20-21 in Pikesville, Maryland. The Sol Schwartz #SaveCollegeTennis All-In Tournament presented by Holabird Sports is a memento to Schwartz who was a huge college tennis advocate that passed away suddenly this past March. There was a nice article on 10sballs.com that gives some more background on both Schwartz and the creation of this tournament so if you get a chance give it a read.