Both of Friday’s NCAA Doubles Finals needed extra time to crown a champion and it was just a few points here and there that decided each match.

Makenna Jones and Elizabeth Scotty became North Carolina’s second NCAA Women’s Doubles Champion after defeating Texas’s Lulu Sun and Kylie Collins 7-6(3), 4-6, 10-8. The UNC duo rallied from a 3-0 first-set deficit to take the opening set in a tiebreak. After Sun and Collins won the final three games of the second set to take it 6-4, the match would be decided in a 10-point supertiebreak. The tiebreak teetered back and forth with Sun and Collins just two points away from a win at 8-7* however Jones and Scotty would win the final 3 points to close it out 10-8.

Sun and Collins (both freshman), who played exclusively at No. 1 doubles during the season, finished with a 26-5 record.

END_OF_DOCUMENT_TOKEN_TO_BE_REPLACED

Riffice got off to a slow start and fell behind 5-0 in the first set but then he won three in a row to pull within 5-3. Rodrigues was able to serve out the first set but Riffice’s comeback was just getting started.

Riffice dominated the second set winning the first three games then after a Rodrigues hold he won the next three to force a third set.

Riffice jumped out to a 3-1 lead in the final set and then got a crucial hold on the deciding point to make it 4-2. Rodrigues fought back to even it at 4-4 but Riffice broke and then served it out to win the title.

What made the win that much more impressive was the fact that Riffice was playing his ninth singles match in the last nine days. All said and done Riffice spent 16 hours and 3 minutes on court playing those nine matches and ended up defeating the ITA #1 Draxl, #2 Rodrigues, #3 Habib, #5 Vacherot, #11 Soto, #46 Martin, #84 Ponwith, and #124 Montsi.

Another interesting note about Riffice winning the title was the fact that he didn’t play a single match at No. 1 singles during the dual-match season. Riffice started all but two matches at No. 2 and those other two came at No. 3. I asked the question on Twitter and the 1974 singles champ Stanford’s John Whitlinger said he didn’t play at No. 1 during the season and it’s possible that Stanford’s Jared Palmer may not have played any at No. 1 during the year he won the title in 1991. There isn’t a lot of historical information going that far back but I think we can say comfortably that it hadn’t happened on the men’s side in at least 30 years.

Riffice is the first American to win the title since Virginia’s Thai-Son Kwiatkowski in 2017 and as a result should get a main draw wild card into this year’s US Open. In the post-match interview down below Riffice talks about that potential wild card and what is plans are for the summer and going forward.

Below I have some notes from each match along with the post-match press conferences (videos are courtesy of the NCAA/USTA).

END_OF_DOCUMENT_TOKEN_TO_BE_REPLACED

When Friday’s NCAA Women’s Doubles Final gets underway Texas’s Lulu Sun and Kylie Collins will be facing an ACC opponent for the fifth match in a row after the duo came back from a set down and 6-2 down in the third set supertiebreak to defeat Virginia’s Rosie Johanson and Emma Navarro 4-6, 7-5, 10-8.

Sun and Collins will be attempting to win Texas’s first NCAA Women’s Doubles Championship. They are the fourth Texas women’s doubles team to play for a NCAA Women’s Doubles Championship with the most recent coming all the way back in 1996. In a five-year stretch from 1992 to 1996 Texas had doubles finalists in 1992, 1993, 1995, and 1996 (same pairing in 92/93) though they came up short in each of those finals.

Sun and Collins’s finals opponent will be North Carolina’s Makenna Jones and Elizabeth Scotty. The UNC team defeated their third ACC opponent in the past four matches with a 6-3, 6-4 win over NC State’s Alana Smith and Anna Rogers. If Jones and Scotty can win the title on Friday, they’d become the second UNC doubles team to win a NCAA Women’s Doubles Championship. Sara Anundsen and Jenna Long won the title in 2007 with a 1-6, 6-2, 6-2 win over William & Mary’s Megan Moulton-Levy and Katarina Zoricic.

The men’s doubles final will be an All-SEC affair between Tennessee and Auburn.

END_OF_DOCUMENT_TOKEN_TO_BE_REPLACED

Perez-Somarriba, who came back for a fifth-year of eligibility after COVID wiped out the end of her senior year, won a tough first set over Oregon freshman Janice Tjen then pulled away for a 7-6(4), 6-0 win. Perez-Somarriba will attempt to become the first back-to-back singles champion since Stanford’s Nicole Gibbs won the title in 2013 and 2012.

Perez-Somarriba’s opponent in the final will be another freshman, Virginia’s Emma Navarro. Navarro booked her spot in the final with a 6-4, 2-6, 6-2 win over top seed Sara Daavettila. Navarro is the first freshman to advance to the NCAA Women’s Singles Final since Duke’s Mallory Cecil in 2009. Cecil won the title with a win over a Miam’s Laura Vallverdu.

On the men’s side it’ll be an All-SEC final after Florida’s Sam Riffice defeated the top seed Kentucky’s Liam Draxl in three sets while South Carolina’s Daniel Rodrigues advanced when his opponent Baylor’s Adrian Boitan was forced to retire while trailing 7-6, 3-1.

Rodrigues and Riffice didn’t meet during the regular season dual-match between South Carolina and Florida, because Rodrigues played at 1 and Riffice at 2, however they did play each other back on October 23rd at the Gamecock SEC Fall Shootout – Rodrigues won 6-3, 4-6, 6-4. The one other meeting between the two came back on April 14, 2019, with Riffice winning 6-3, 6-2.

The last time Florida had a player make the men’s singles final was in 1999 when Jeff Morrison defeated Harvard’s James Blake. South Carolina will be going for back-to-back titles after Paul Jubb won it in 2019.

Below I have some notes from each match.

END_OF_DOCUMENT_TOKEN_TO_BE_REPLACED

NCAA Doubles Quarterfinal Recap; ACC Has 3 of 4 Remaining in Women’s Draw; 2 from SEC on Men’s Side; Navarro Still Alive in Both Doubles/Singles

The ACC heavy women’s double draw is guaranteed to have at least one finalist from the conference after 3 of the 4 winners on Wednesday were from ACC schools.

The only remaining seeded team, UNC’s Makenna Jones and Elizabeth Scotty, advanced with a win over Virginia’s Sofia Munera and Natasha Subhash.

The only women’s match that went to a third set supertiebreak was won by Texas’s Kylie Collins and Lulu Sun. The Horns had a chance to close it out in straight sets but FSU’s Andrea Garcia and Nandini Das fought off two match points to break and force a second set tiebreak.

Virginia freshman Emma Navarro is the only player left in either the women’s or men’s tournament that has a chance to pull off the singles/doubles sweep. Navarro and Rosie Johanson only needed 64 minutes to win their quarterfinal match over Texas A&M’s Jayci Goldsmith and Tatiana Makarova. The last women’s player to pull off the singles/doubles sweep was Stanford’s Nicole Gibbs in 2012.

The men’s doubles matches were much closer with 3 of 4 going to a third set supertiebreak. The highest remaining seed, UNC’s #2 William Blumberg and Brian Cernoch, lost 10-7 in the third to Baylor’s Sven Lah and Constantin Frantzen.

The only top four seed left is Tennessee’s Adam Walton and Pat after the third-seeded Vols duo won in just 64 minutes over South Alabama’s Loïc Cloes and Clément Marzol,

The Minnesota men’s program officially ended on Wednesday when Siim Troost and Vlad Lobak lost 10-7 in the third to Pepperdine’s Guy Den Ouden and Adrian Oetzbach. The University of Minnesota announced this past fall that the men’s program would be discontinued following the completion of the current season.

The women’s semifinal matches start at 4:00 pm ET on Thursday day while the men start at 6:00 pm ET.

END_OF_DOCUMENT_TOKEN_TO_BE_REPLACED

Quick straight set blowouts were the theme of the day with 7 of 8 matches finishing in straight sets with most not lasting much more than 75 minutes. The top two seeds in both the men’s and women’s draw advanced to the semifinals with only Miami’s Estela Perez-Somarriba needing to go three sets.

Perez-Somarriba, who won the title in 2019, was in a world of trouble against UCLA’s Abigail Forbes. Forbes had what appeared to be an unsurmountable 7-6, 5-0 lead but remarkably Perez-Somarriba won 7 straight, while fighting off one match point, to force a third set. Despite going a break down to start the third set, Perez-Somarriba regained control and won the final set 6-3.

Oregon freshman Janice Tjen continued her great run with a straight set win over NC State’s Anna Rogers. Tjen went 18-2 during the season while starting all matches at No. 1 singles. The previous best mark for an Oregon player was a third round appearance in 2003 by Daria Panova.

Below I have some notes from each match along with Thursday’s schedule – the women’s semifinals will start at 12 pm ET with the men starting at 2 pm ET.

END_OF_DOCUMENT_TOKEN_TO_BE_REPLACED

NCAA Doubles Round of 16 – Top 2 Women’s Seeds Fall; Top Men’s Seed Is Out

The rubber hit the road on Tuesday with only one seeded team advancing to the women’s quarterfinals while the men’s top seed and No. 4 seed were sent packing.

The women’s doubles draw saw 5 of the 6 remaining seeds fall with UCLA’s Jada Hart and Elysia Bolton ousting the top seed Kentucky’s Akvilė Paražinskaitė and Fiona Arrese 6-3, 6-2. Texas’s Kylie Collins and Lulu Sun blew out the No. 2 seed UNC’s Sara Daavettila and Cameron Morra 6-0, 6-1 in just 46 minutes. The only seed still alive is UNC’s Makenna Jones and Elizabeth Scotty after the Tar Heels duo fought off a match point to win a third set supertiebreak over Furman’s Katarina Kozarov and Julia Adams.

Minnesota’s Siim Troost and Vlad Lobak knocked out the men’s top seed Ole Miss’s Tim Sandkaulen and Finn Reynolds 6-4, 3-6, 10-4. The No. 2 and No. 3 seeds both advanced to the quarterfinals with UNC’s William Blumberg and Brian Cernoch winning a third set supertiebreak over USF’s Rithvik Bollipalli and Jacob Wojcik while Tennessee’s Adam Walton and Pat Harper won in straight sets against Georgia Tech’s Marcus McDaniel and Andres Martin.

All the quarterfinal matches start at 6:00 pm ET on Wednesday with live scoring available and streaming available through the TennisOne app. 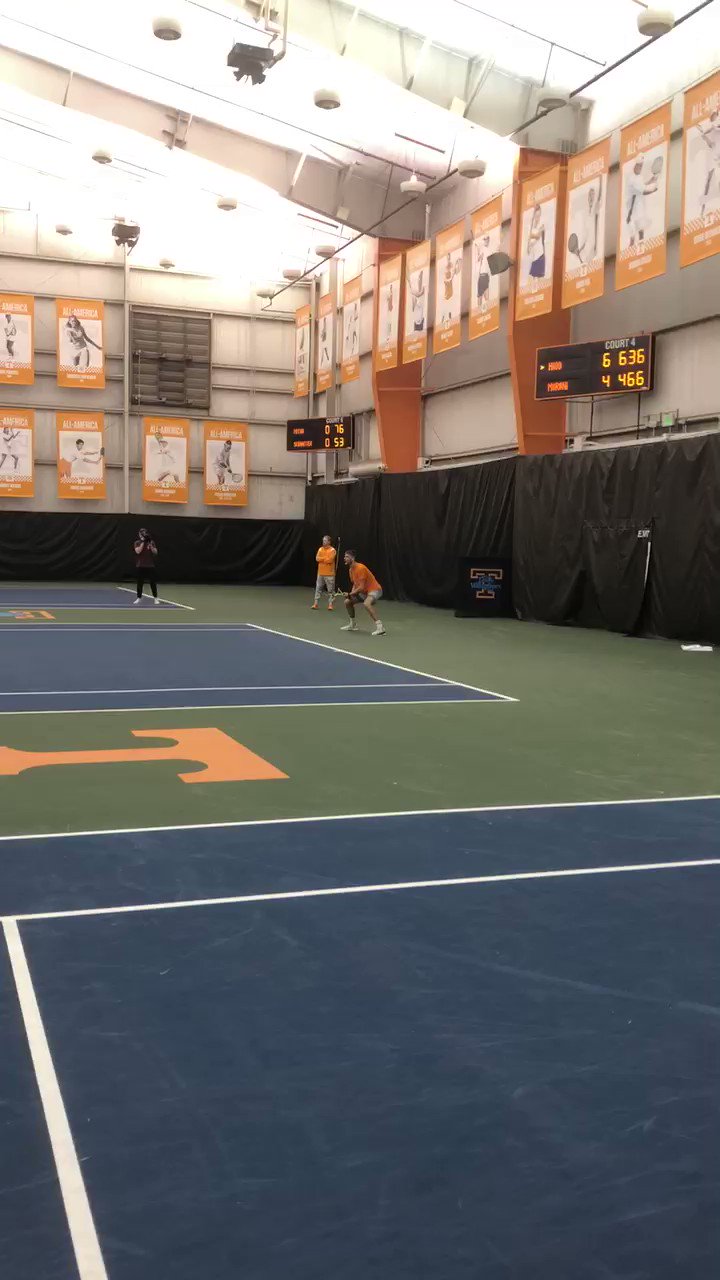 @ITA_Tennis: Truly a must watch! After being sidelined for nearly three years, Jack Winkler made his @MSU_MTennis return this spring and we can’t wait to see all he accomplishes this season 💪 #WeAreCollegeTennis https://t.co/oMm26CfFkl
h J R
College10s2day 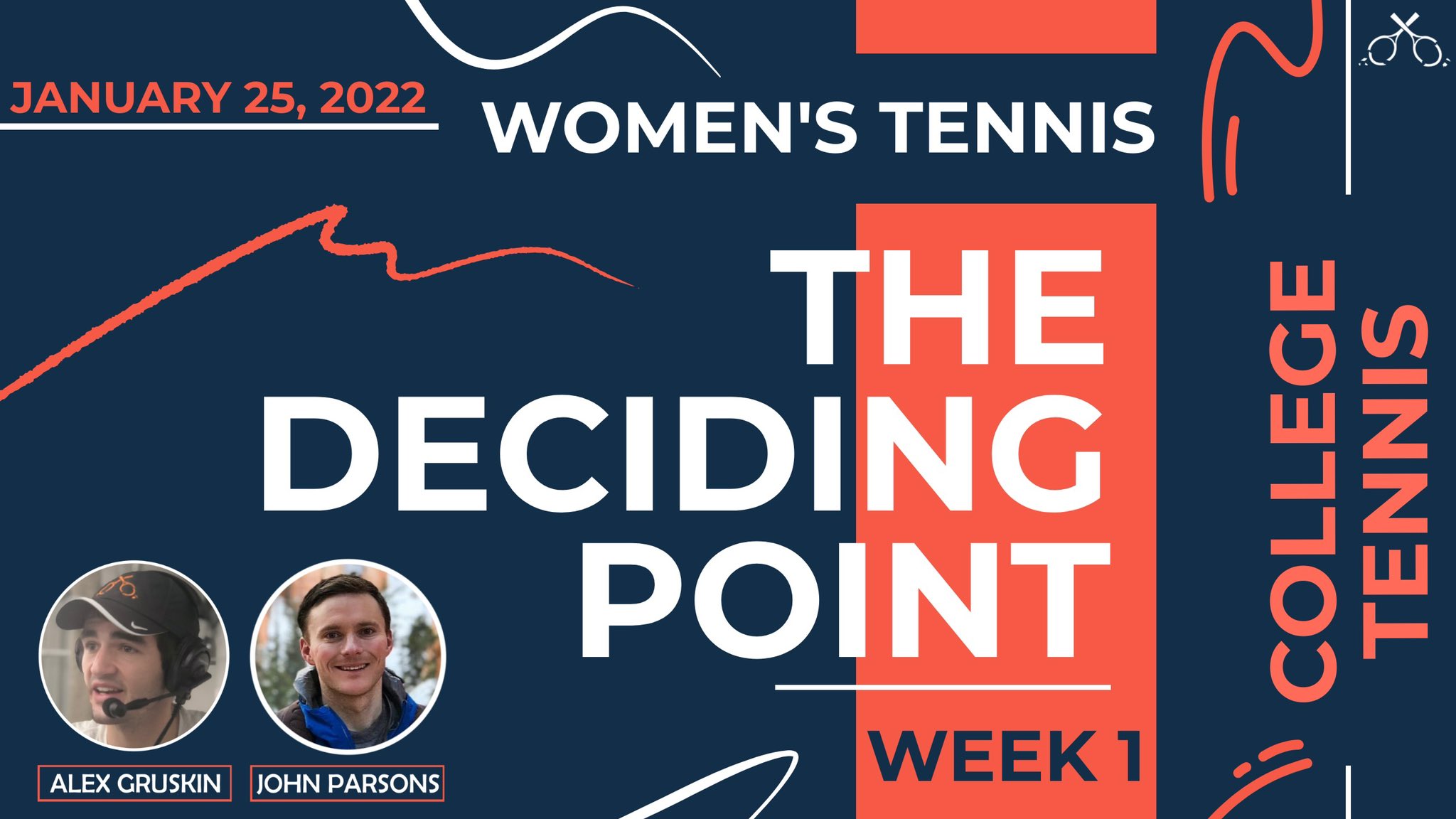