Despite a slew of early upsets the top two women’s seeds still remain in what will be an ACC-heavy semifinals while on the men’s side it’ll be an upperclassmen-laden semifinals with three of the top four seeds still alive.

Women’s top seed Miami junior Estela Perez-Somarriba advanced to the semifinals for the second time in three years after a 6-4, 6-4 win over Illinois sophomore Asuka Kawai. Perez-Somarriba on how she felt her match today went, “I think it took me awhile to get used to her ball, especially the serve. Once I was able to figure that out, I think that I was more confident and trusting all of my shots. On her second appearance in the semifinals, “Well, I think that the other years I gained a lot of confidence. This is all about the process and learning about past matches. Im really happy that I was in this situation a couple of years ago and Im happy Ive had the opportunity to fight and play for the rest of Miami and do my best.”

Perez-Somarriba’s semifinal opponent will be North Carolina freshman Cameron Morra, who became the first UNC women to reach the semifinals as a freshman, after defeating Texas Tech senior Felicity Maltby 6-3, 5-7, 6-3.

Women’s second seed Georgia sophomore Katarina Jokic became the ninth Georgia women to advance to the semifinals after coming back from a set and break down to defeat UCLA junior Jada Hart 4-6, 6-4, 6-3 in 2 hours and 45 minutes. Jokic, who was playing her 12th match in the last 7 days (singles/dubs) fell behind 4-6, 1-3 before rallying to win the second set 6-4. Jokic also went down a break in the third set at 1-2 before breaking back and closing it out on a deciding point hold.

Jokic was back on the court a short while later to play doubles but she and Lourdes Carle fell 10-8 in the third set supertiebreak to Michigan’s Kate Fahey and Brienne Minor. Georgia head coach Jeff Wallace on Jokic’s day, “It was a really tough match today. Both players really gave it everything they had. Kat [Jokic] was so tired I wasn’t even sure if she was going to get through this thing. There was a moment during the match [in singles] it was almost like ‘should we stop for health reasons’, but she just kept playing and she reached a level that was absolutely incredible. She found just barely enough energy to get through it. And then quite honestly I didn’t think she would be able to get back out there for doubles, but a cold shower, a little bit to eat, and a massage, she got ready, and played some really good doubles. We had a huge opportunity there, but lost a close one in a 10-point tiebreaker. They played really well and I’m really proud that they are All-Americans.”

Jokic’s semifinal opponent will be Duke sophomore Kelly Chen, who became the fifth Duke women to reach the semifinals, after a 6-3, 6-4 win over UNC junior Sara Daavettila. Chen jumped out to big leads in each set leading 5-0 in the first and 3-0 in the second. I am really excited, Chen said. Its my first time in the semifinals and Im excited for whats to come tomorrow.

Both women’s semifinals will start no earlier than 5 pm eastern.

When play began on Monday if you’d have said that 3 of the top 4 men’s seeds would make it the semifinals and the 1 that wouldn’t was JJ Wolf you’d have turned a lot of heads. Well that’s where we are at after No. 1 Nuno Borges, No. 3 Alex Rybakov, and No. 4 Paul Jubb won their quarterfinal matches with No. 7 Aleks Kovacevic rounding out the foursome.

Mississippi State senior Nuno Borges won his 30th consecutive match and advanced to the NCAA Semifinals for the third year in a row with a straight set win over USC junior Brandon Holt. Borges broke Holt to go ahead 5-3 in the first but Holt broke back and held for 5-5. After Borges held for 6-5, he broke to take the set 7-5. In the second set, Borges jumped out to a 4-1 lead but Holt would hold and break to put it back on serve at 4-3. Borges broke back and then served it out to win 7-5, 6-3.

“I felt I had momentum at the end of the first set, so I just trusted that,” Borges said in MSU’s recap. “I stayed tough, I ended up getting a break in a crucial moment. I took that into the second set. I finished on a good one, so I’m happy about that. Every match here is hard, and I have to learn every single match. I’m very happy to have gotten this far again, and being able to do so three years in a row is amazing. It just shows how hard I’ve worked all year.”

Last year Borges fell in the semifinals to Wake’s Borna Gojo 2-6, 7-5, 6-2 after having three match points in the second set. The year prior Borges went down to then UNC freshman William Blumberg 6-2, 7-6(1).

Borges’s semifinal opponent this year will be TCU senior Alex Rybakov who defeated UNC junior William Blumberg in three sets. In the first set, Rybakov broke Blumberg’s 4-5 service game on the deciding point to take the first set 6-4. Blumberg came back in the second set with three breaks of Rybakov’s serve to win the set 6-3. In the final frame, it was Rybakov breaking Blumberg for 2-1 and then he’d had one more break before serving it out for a 6-4, 3-6, 6-2 win.

Rybakov joins Cameron Norrie as the only other TCU men’s player to make the semifinals and will now have to try and defeat Borges who just defeated him in straight sets two weeks ago.

Rybakov on previewing his match against #1 Nuno Borges in semifinals, “Im excited. Ive played him three times this year, I know he hasnt lost in the dual matches so hes definitely in form. I know hes going to bring it. I played him earlier this year and beat him outdoors. Indoors we were tight and didnt finish. Then he beat me outdoors two weeks ago pretty clean. I know hes going to bring it and Im going to have to play my best match.”

South Carolina junior Paul Jubb became the first South Carolina man to advance to the semifinals since Guillaume Legat in 2001 after defeating Mississippi State junior Giovanni Oradini in straight sets. In the opening set each player broke twice but Jubb came through in a tiebreak 7-4 and then in the second set Jubb jumped out to a 3-0 lead. Oradini won the next three to even it at 3-3 but Jubb finished the match by holding at love, breaking, and then holding at love again to win 7-6(4), 6-3.

Jubb’s semifinal opponent will be Illinois junior Aleks Kovacevic who battled past Florida freshman Sam Riffice in three close sets. Riffice served for the first set up 5-4 but Kovacevic broke and held to go in front 6-5. Riffice held and then rolled through the tiebreak 7-2. Riffice served for the match in the second set up 5-3 but Kovacevic broke and held for 5-5. After Riffice held for 6-5, Kovacevic fought off a match point to force a tiebreak. Riffice went ahead 3-1 in the tiebreak but Kovacevic came back to take it 7-5. Kovacevic jumped out to a 4-1 lead in the final set and would close it out 6-7, 7-6, 6-3.

Kovacevic is the third Illinois man to reach the semifinals joining Kevin Anderson (2007) and Amer Delic (2003).

“Obviously I am proud of Kova,” said Illinois Brad Dancer. “He had very little control for most of that match. A large part of that credit goes to Sam (Riffice). He is a phenomenal player and took everything away from Kova.”

In talking about Kovacevic’s semifinal opponent, “We were able see Paul (Jubb) against Zeke (Clark) in the Fall, so we know how good he is,” said Dancer.

Riffice’s post-match interview is available at this link.

Both men’s semifinals will get underway at 4 pm eastern and will be televised on the Tennis Channel.

The men’s doubles semifinals will definitely have a southern flavor with 3 of the 4 semifinalists hailing from the Southeastern Conference.
Mississippi State’s Niclas Braun and Giovanni Oradini ousted the top seed Baylor’s Jimmy Bendeck and Sven Lah 6-4, 6-3. Braun and Oradini became just the second MSU duo to advance to the semifinals with the other coming back in 1994 (Laurent Miquelard/Joc Simmons).
“We took care of our service games really well,” Braun said. “I think the keys were our high first-serve percentage, very solid clean-up volleys and first volleys for the servers. We’re really excited to have made it this far. It shows how hard we’ve worked as a team and we can’t wait to get back out there tomorrow night for another match.”
Braun and Oradini will meet Alabama’s Patrick Kaukovalta and Mazen Osama who defeated Wichita State’s Murkel Dellien and Marius Frosa 6-3, 7-6(5). Kaukovalta and Osama went down a break at 6-5 in the second set but broke back and then came back from 5-1 down in the tiebreak to win it. Kaukovalta and Osama are the first Alabama men’s duo to make the semifinals since 1990.
The other semifinal will match up UCLA’s Maxime Cressy and Keegan Smith against Tennessee’s Timo Stodder and Preston Touliatos.
Cressy and Smith improved to 19-0 on the year with a 7-6(4), 6-3 win over San Diego’s Joel Gamerov and August Holmgren. Cressy and Smith become the third UCLA duo to make the semifinals in the last four years.
Stodder and Touliatos booked their semifinal spot with a 6-4, 5-7, 10-5 win over Mississippi State’s Nuno Borges and Strahinja Rakic. After splitting sets, Stodder and Touliatos pulled away in the tiebreak by winning 5 of the final 6 points. Stodder and Touliatos are Tennessee’s seventh men’s doubles team to advance to the semifinals.
Men’s Dubs Quarterfinals:
Niclas Braun/Giovanni Oradini (Miss State) def. [1] Jimmy Bendeck/Sven Lah (Baylor) 6-4, 6-3
Patrick Kaukovalta/Mazen Osama (Alabama) def. Murkel Dellien/Marius Frosa (Wichita State) 6-3, 7-6(5)
[5-8] Timo Stodder/Preston Touliatos (Tenn) def. [3] Nuno Borges/Strahinja Rakic (Miss State) 6-4, 5-7, 10-5
[2] Max Cressy/Keegan Smith (UCLA) def. Joel Gamerov/August Holmgren (USD) 7-6(4), 6-3
Men’s Dubs Semifinals:
Niclas Braun/Giovanni Oradini (Miss State) vs. Patrick Kaukovalta/Mazen Osama (Alabama) – NB 7 pm
[2] Max Cressy/Keegan Smith (UCLA) vs. [5-8] Timo Stodder/Preston Touliatos (Tenn) – NB 7 pm

Three of the top four women’s seeds advanced to the double semifinals with USC’s Angela Kulikov and Rianna Valdes leading the charge after a 6-1, 6-2 win over Tulsa’s Martina Okalova and Vera Ploner. USC’s Kulikov and Valdes are the third USC women’s pair to advance to the semifinals.

UCLA’s Gabby Andrews and Ayan Broomfield will meet their crosstown rivals in the semifinals after a 4-6, 6-1, 10-7 win over UNC’s Makenna Jones and Cameron Morra. The third set tiebreak was tied at 3-3 at the first changeover and Andrews and Broomfield led 7-5 at the second changeover. The UCLA duo upped their lead to 9-6 before winning it 10-7.

Michigan’s Kate Fahey and Brienne Minor become the first UM women’s duo to advance to the semifinals after a 6-2, 3-6, 10-8 win over Georgia’s Lourdes Carle and Katarina Jokic. Fahey and Minor had a 9-5 lead in the tiebreak but Carle and Jokic got it back on serve at 9-8. Fahey and Minor would get the break back and close it out on the next point.

@College10sRanks: When you’ve gotten close enough to some circles in the game every now and then you get some court side celebrations (and sometimes with added commentary lol). But you have to love the excitement and pure joy from these @BallStateMTNS kids on the big upset. Keep em coming y’all https://t.co/H4PBmmfoiL 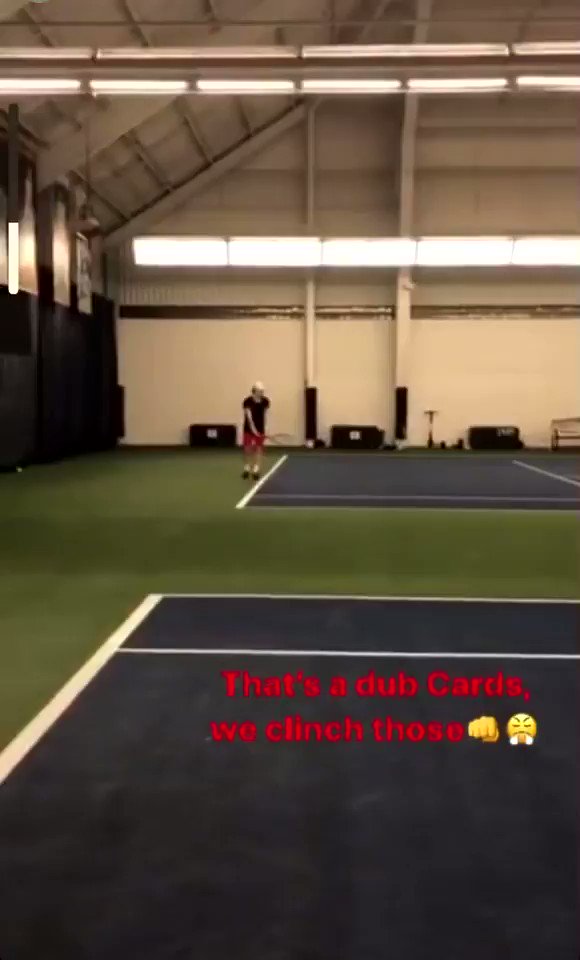