The third time was the charm for Nuno Borges after the Mississippi State senior advanced to the finals of the NCAA Men’s Singles Championship after a straight set win over TCU senior Alex Rybakov. Borges was playing in the NCAA Semifinals for the third year in a row but after losses the last two years he put it all together on Friday and became the first MSU men’s player to advance to the NCAA Singles Final.

The opening set was back and forth with a total of five breaks of serve with the last coming when Borges broke Rybakov’s 5-6 service game after Rybakov had three set points at 40/15.

“Today was about seeing who could apply the game plan better,” Borges said. “We knew each other pretty well, so I knew I had to stick to my game plan and stay tough. I think, at the end, he was a little more tired than I was, so that helped me.”

After the match Rybakov talked about what what makes Borges such a tough opponent, “He has the same intensity point in and point out. There are some guys here that will give you some here and there, but he makes you play every point. I had a couple three setters, today my legs were a little a bit tired and he got the best of me.”

Borges will carry a 31-match winning streak into the final with two of those wins coming over his finals opponent, South Carolina junior Paul Jubb.

Jubb became the first Gamecocks man to advance to the finals after a three-set win over Illinois junior Aleks Kovacevic.

In the opening set, Jubb came back from 0-3 down to get it back on serve at 4-5 however Kovacevic would break back on the deciding point to take the set 6-4.

The second set started off with an exchange of breaks but Jubb would add a second break to go up 3-2. It’d be all holds the rest of the set with Jubb forcing a third after taking the second 6-4. “My coaches were saying that it ‘doesn’t matter if you run out of time in the first set; you’re moving in the right direction, so just try to keep it going in the second set,’ Jubb said. “I started seeing the ball a bit better and moving to the ball a bit better on my forehand. Things just started going forward in my direction.”

Kovacevic on how he would sum up his week in Orlando, “It was a great week. I took every opportunity I could. I really wanted it, to go all the way, but it happens. Credit to Paul, he played unbelievable. Hes a really good player, this was one of the matches where I really felt like I was pushed. I was on the defensive a lot and my game is usually to take it to him and play on the offense but he did a really good job of taking that away from me in the second and third sets so credit to him. Ill just have to come back stronger next year.

When talking about his finals opponent (Borges), Jubb had this to say, “It’s a great matchup. We’ve played twice already this season and both pushed each other to the limit. I’m going to do my best and see how it goes.”

The men’s final begins at 4 pm eastern and will be broadcast live on the Tennis Channel with live scoring available at this link.

The women’s final will be 1 vs. 2 after top-seeded Miami junior Estela Perez-Somarriba and second-seeded Georgia sophomore Katarina Jokic took care of business on Friday.

“She just looked like she had ice in her veins today,” Miami head coach Paige Yaroshuk-Tews said. “She did a good job of keeping Morra on her toes, which is what you have to do. She’s a very rhythmic player. She hits big off of both sides. When she’s down, she just absolutely rocks the ball. Stela served well, used her off-pace serve to get short looks, handled the situation well, I thought, and moved so much better than yesterday, which allowed her to just play great tennis.”

Perez-Somarriba’s post-match interview is available at this link.

Morra on her thoughts after the match, “I think Estela has had a great tournament, she deserves it and I know shell do great tomorrow. But its been such a great experience. Ive had my dad here all week and to have my family around and my coaches, its been great, I really cant complain.”

The two other Miami players to advance to the finals were Laura Vallverdu and Audra Cohen in 2009 and 2007 with Vallverdu falling to Duke’s Mallory Cecil while Cohen defeated USC’s Lindsey Nelson.

Jokic became the fifth Georgia women’s player to advance to the finals, first since Chelsey Gullickson in 2010, after a straight set win over Duke sophomore Kelly Chen.

Chen came out strong and took an early 3-1 lead, and she had a chance to add a second break for 4-1, but Jokic held on the deciding point and then took the next three games to go up 5-3. Chen broke back and held for 5-5 but Jokic held and broke to take the opening set 7-5. In the second set, Jokic jumped out to a 4-1 lead and closed it out 7-5, 6-2.

“It was a really tough match,” Jokic said. “We played a really good match. I’m glad I won in straight sets though, because I have one more to go. I’ll rest as much as I can, eat, sleep and get in the ice bath to recover as best as I can. I’m going to think about strategy, but also talk to Jeff [Wallace, head coach] and Drake [Bernstein, associate head coach] in preparation for tomorrow.”

“I’m really excited for Katarina,” Georgia head coach Jeff Wallace said. “She played great today and looked healthier than what she has been. She has been pushed to max this past week playing 14 matches, which is the most by any man or woman down here. It has been a super-human effort. Today she looked strong. I really want to thank our strength and conditioning coach Katrin Koch and our athletic trainer Abbey Sponseller for the spectacular job today and leading up to it.”

Kelly Chen on how she would describe her run to the semifinals, “If I wouldve looked back five months ago, at least with individuals, I dont think I wouldve been here. But Ive worked hard to get to where I am now so even though I lost today Im still pretty proud of myself.”

The women’s final begins after the conclusion of the men’s final – no sooner than 5:30 pm eastern.

Three of the four men’s doubles semifinalists came from the SEC but just one made it to the finals after the second-seeded UCLA duo of Maxime Cressy and Keegan Smith rolled to a 6-2, 6-1 win over Tennessee’s Timo Stodder and Preston Touliatos.
Cressy and Smith will try to become UCLA’s 14th men’s doubles team to win a NCAA Doubles Championship, second straight and third in the last four years, when they face Alabama’s Patrick Kaukovalta and Mazen Osama.
Cressy and Smith’s post-match interview is available at this link.
Alabama’s Patrick Kaukovalta and Mazen Osama became the first Crimson Tide men’s team to advance to the NCAA Doubles Final after defeating Mississippi State’s Niclas Braun and Giovanni Oradini 6-2, 7-5.
Kaukovalta and Osama’s post-match interview is available in Alabama’s recap.
Alabama head coach George Husack had this to say about his winning doubles duo, “It was a super performance by Mazen (Osama) and Patrick (Kaukovalta) tonight. They did very well calling their serves and holding much like a catcher calling pitches for strikes. They became more aggressive with their returns late in the second and capitalized on opportunities. They are on a good path and determined to finish strong against a tough UCLA team tomorrow. It should be an entertaining match.”
Men’s Dubs Semifinals:
Patrick Kaukovalta/Mazen Osama (Alabama) def. Niclas Braun/Giovanni Oradini (Miss State) 6-2, 7-5
[2] Max Cressy/Keegan Smith (UCLA) def. [5-8] Timo Stodder/Preston Touliatos (Tenn) 6-2, 6-1
Men’s Dubs Finals:
[2] Max Cressy/Keegan Smith (UCLA) vs. Patrick Kaukovalta/Mazen Osama (Alabama) – 7 pm ET

If Andrews and Broomfield win the title they’d become the 7th UCLA women’s team to win the NCAA Doubles Championship and first since Tracy Lin and Riza Zalameda in 2008.

“Gabby and I, we both transferred here,” said Broomfield. “We both transferred to UCLA. We were looking for a more competitive program, a better program, a better place for us to grow as people and as tennis players. Win or lose tomorrow, I think we’ve done that. I think we’ve helped the program as much as we could. I think that we’ve grown as individuals. We have great relationships with the girls on the team, the coaching staff, everyone at UCLA. So I think the win would be a lot for UCLA and the tennis program, but I think win or lose, we’re really proud of what we’ve accomplished already.”

The other doubles semifinal wasn’t as close with Michigan’s Kate Fahey and Brienne Minor becoming the first Wolverines women’s duo to advance to the finals after a 6-2, 6-2 win over South Carolina’s Ingrid Gamarra Martins and Mia Horvit.

@College10sRanks: Crazy finish to this @UGAtennis vs @GamecockMTennis match at the SEC tourney. South Carolina up 3-2 and Henning was up 5-2 in 3rd but lost 4 straight and Samuel actually served for the match at 6-5 but Henning broke back. Now in a 3rd set breaker for the match
h J R
College10s2day 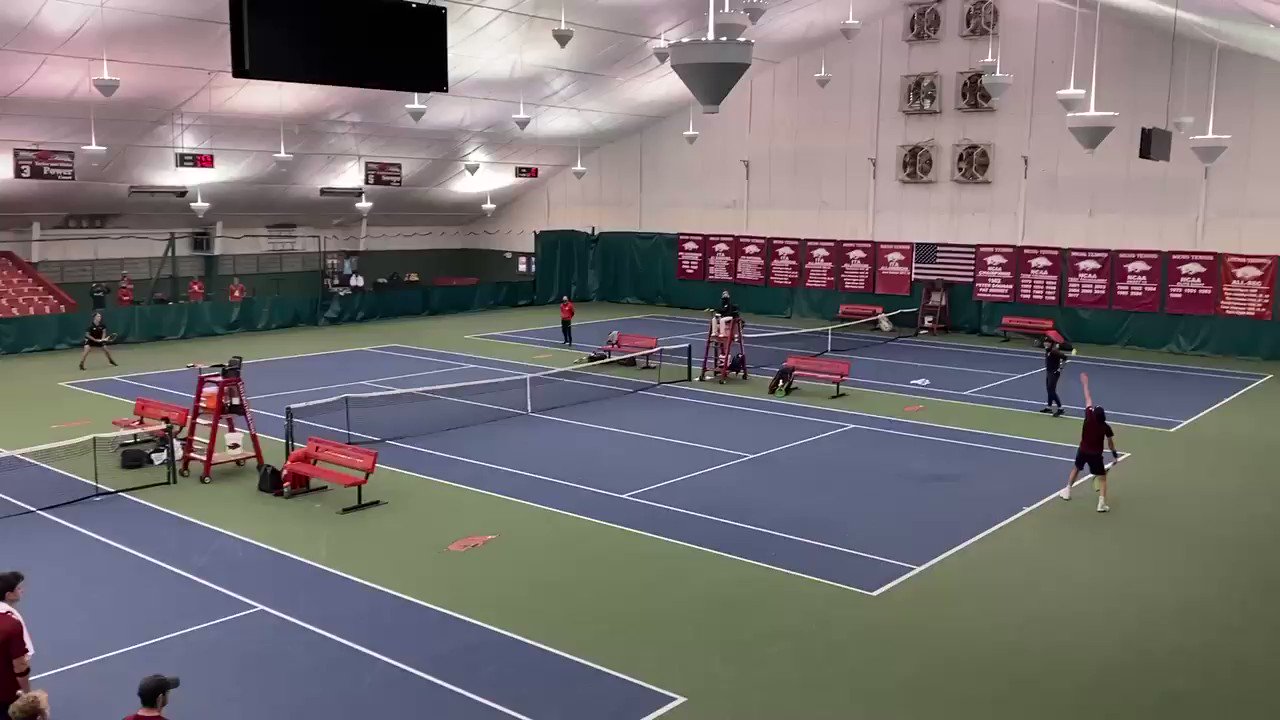 @GamecockMTennis: THE GAMECOCKS WIN! Samuel wins in the third set tiebreak to send South Carolina to the semifinals in the @SECMTennis tournament! https://t.co/sW2an37ymW 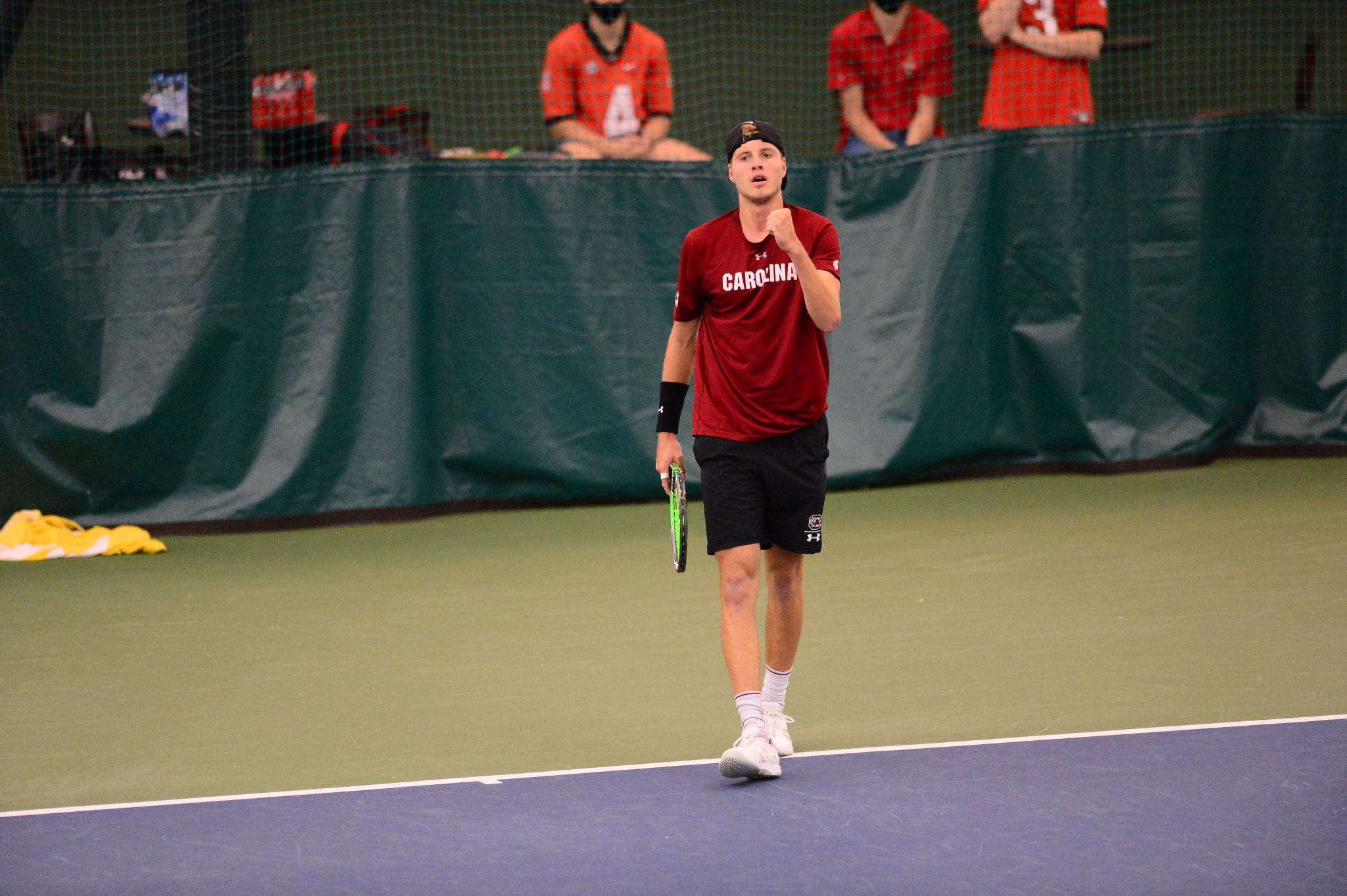